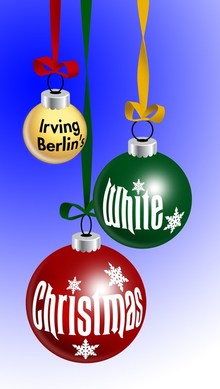 The New England Theater Conference (NETC) is composed of individuals and organizations from the six-state New England region. This is the 52nd year that The Moss Hart Memorial Award has been given. This award recognizes shows which represent affirmative views of human courage and dignity, which have strong literary and artistic merit and exemplify fresh, imaginative, and creative treatment within the intent of the playwright. The award was designed to influence the choice of plays performed. The award founders felt that people needed theatre which would reaffirm Man's purpose of dignity, courage, faith, and understanding. The Weston Friendly Society’s Fall 2013 production of Irving Berlin’s White Christmas has been awarded the Moss Hart Memorial Award in the Community Theater division.
​
Music and Lyrics by Irving Berlin
Book by David Ives and Paul Blake
Based upon the Paramount Pictures film written for the screen by Norman Krasna, Norman Panama, and Melvin Frank
Directed and Choreographed by Dan Sullivan
Music Directed by Allison Grocela